Nigerian authorities piled hundreds of bodies into massive graves in the northern city of Maiduguri following a week-long military crackdown against the banned Boko Haram organization. The Red Cross has expressed concerns about a possible outbreak of cholera as a result of the enormous number of corpses littering city streets. 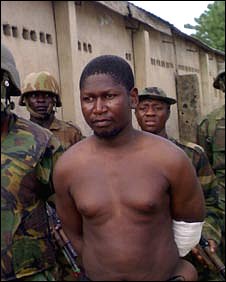 The Boko Haram (roughly translated as Western knowledge is forbidden) group was fiercely anti-intellectual, and its leader Mohammad Yusuf had publicly condemned the notion that the earth is round as contrary to God. The crackdown came amid reports that the group was arming for violence resistance against the government, though during the clashes they appeared to be armed with little more than bows and arrows and machettes, no match for the heavily armed Nigerian soldiers.

Early in the clashes, Yusuf was captured by Nigerian police and died hours later in custody under mysterious circumstances. The government initially claimed he was shot trying to escape, though police now maintain that he died of injuries suffered during his capture.

The story is dramatically contradicted, however, by a photograph obtained by the BBC. In the photograph, Yusuf is seen in custody, with what appears to be a minor wound bandages on his arm but otherwise in good health. When his body was presented to journalists a few hours after this picture was taken, he was riddled with bullets.