Shortly after the start of their massive offensive in the Helmand River Valley, top US Marines commander Brigadier General Larry Nicholson complained that only 650 Afghan troops were involved, saying that “I’d like more.” According to the Afghan military, he’s getting more. 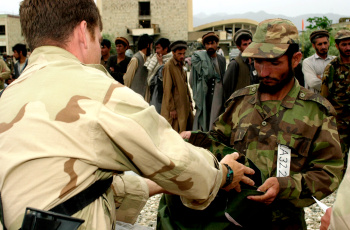 The Afghan Army is sending another battalion to join the offensive, adding another 700 troops to the fight. The overall Afghan military presence in Helmand Province is currently just under 6,000.

But as the enormous yet generally ineffectual Afghan military dispatches those troops to the US offensive, a growing number of clashes in northern Afghanistan, particularly around the Kunduz Province, have been stretching that military to its limits.

The US has been looking to grow the Afghan military, already nearly 100,000 strong, even further. Yet the cost of this military is already several times more than the Afghan government’s overall revenue, leaving open the question of how they’re ever going to maintain such a force if the international forces decide to stop heavily subsidizing them.