In the eight years since the US invasion of Afghanistan, the conflict has steadily expanded through Pakistan. It started in the tribal areas, and indeed those are still seeing some of the largest unrest, but eventually it expanded into the North-West Frontier Province (NWFP), where a military offensive chased millions of Swatis from their homes. Isolated attacks have happened in the rest of the nation as well, and many doubt if the Pakistani government will survive. 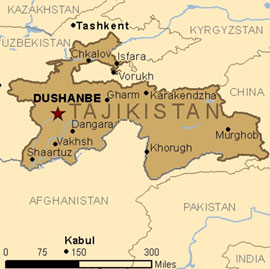 So what’s next for the growing militancy, besides setting monthly records in Afghanistan? Some diplomats fear that it could be Tajikistan, which they say is likely spillover from the Pakistani military’s Swat Valley offensive, done at the behest of the US.

It’s not just the diplomats, locals also see trouble brewing in Tajikistan. The government has tried to slough off the fighting as a war on drugs, but increasingly attacks along the Afghan border seem to be for their own sake, and far from just another drug war, the nation seems to be battling a full-fledged insurgency.

Tajikistan declared its independence during the breakup of the Soviet Union in 1991, and was almost immediately torn apart by a bloody, five year long civil war between the autocratic government and an opposition made up of both pro-democracy liberals and Islamists.