As thousands of US Marine pour into the Helmand River Valley in what is being called the single largest ground operation since the Soviet Occupation of the 1980’s, and while they say the invasion is meant to improve the lives of the villagers there, they are not exactly being greeted as liberators. 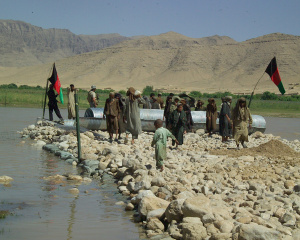 Village leaders are making it very clear that they have seen invading forces come and go, they have heard all the promises and have little to show for it. The council members met with and issued demands to the Marines, they want water, they want a clinic, they want a school, and they aren’t going to trust the foreign troops until those are delivered.

The residents of these sleepy villages aren’t big on talking, and the elders made it clear that if the US doesn’t deliver on those demands, there won’t be any more meetings.

The offensive is part of the “new” strategy proposed by the Obama Administration to replace the previous “new” strategy, which the Bush Administration put into place in the fall to replace the one before that, and so on. New strategies are all the rage in the eight year long military operation, but in practice the tactical shifts have done little to change the reality on the ground. The violence continues to worsen, the troops continue to invade villages, and the villagers still wait for their water.