It is being reported today that an unnamed US soldier and three Afghan soldiers were ambushed and captured Tuesday by the Taliban in Afghanistan’s restive Paktika Province. The military confirmed that the soldier was missing and believed captured. 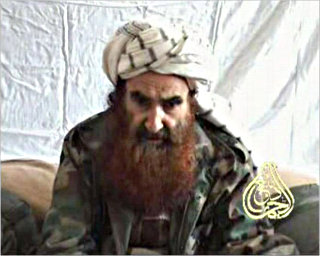 Sirajuddin Haqqani
One US official later said that the soldier has since been sold to the Haqqani clan, who is now holding him. The US is pressuring tribal chiefs and village elders along the Afghan/Pakistan border to “do the right thing and solve this.”

A Taliban commander, speaking over a satellite phone so as not to reveal his location, claimed that the soldier was captured in the Yusuf Khil district and was drunk at the time. US officials denied the reports, claiming the Taliban were known liars.

4 thoughts on “Taliban Seize US Soldier, ‘Sell’ to Militant Clan”