Despite its long and sordid history of responsibility for Central American coups d’etat, the White House today insisted that the United States had absolutely no involvement in today’s military coup in Honduras. President Obama has criticized the coup and insists advisers are monitoring the situation. 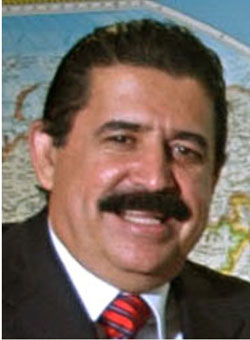 However at least two of the leaders of the coup are reported to have undergone training at the Pentagon’s controversial School of Americas, which will likely continue to fuel speculation at the US, even if it didn’t directly endorse the coup, sewed the seeds for it.

Manuel Zelaya, the ousted Honduran president, seemed to concur with the administration’s denial of culpability, claiming that the United States had foiled a previous coup plot by the nation’s Congress only last week. US diplomats have reportedly been in contact with Zelaya and are trying to return him to power.

Ahead of a vote designed to keep him in power past his term limit, Zelaya was captured by Honduran soldiers who claim they were operating under the orders of the nation’s supreme court. Zelaya is now in exile in Costa Rica.

One thought on “US Denies Role in Honduras Coup”