The Status of Forces Agreement (SOFA) between Iraq and the United States requires that all US combat forces leave Iraqi cities by the end of Tuesday. The US is going to be going along with the requirement, more or less, but those troops won’t be going far. 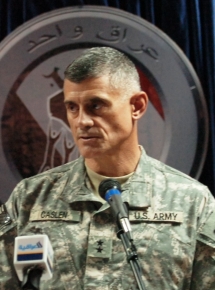 According to Major General Robert Caslen, the commander of US forces in the north, the troops that are being pulled from the cities will be massing along the outskirts of the cities, encircling them in what the general called an attempt to replicate the surge strategy outside of the cities.

Maj. Gen. Caslen expressed concern about the recent spike in massive bombings, and also seemed unsure if the Iraqi government could take over for the US troops inside the cities. He has also reported that the Iraqi government has agreed to keep “non-combat” troops at five locations inside Mosul after the deadline.

Analysts are downplaying the pullback as a change on the ground, noting that US troops will be able to intervene in situations when the Iraqi military requests it. They do, however, see the pullback as a major test to the US-Iraqi relationship.

5 thoughts on “General: US Troops to ‘Encircle’ Iraqi Cities”