100,000 demonstrators packed the main square in North Korea’s capital of Pyongyang today for a massive anti-US rally, as officials in the reclusive government threatened a “fire shower of nuclear retaliation” in the event of a US-led attack from the south. 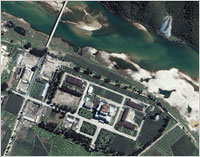 North Korean officials seem particularly jittery following last week’s pledge by the Obama Administration to extend the nuclear umbrella over South Korea, which would treat any attack on the South Korean territory like an attack on the continental US. North Korea yesterday declared that South Korea could not survive under the umbrella in the event of war.

North Korea successfully tested a nuclear weapon last month, sparking massive condemnation from the West. The nation has promised that it will enlarge its nuclear arsenal, which it insists it needs as a hedge against US invasion. US officials insist that they will never accept a nuclear North Korea.

North Korea’s ability to create much of a nuclear arsenal in the near term is unclear, at best. The previous two test explosions have used plutonium presumably culled from the Yongbyon nuclear reactor, which has been shut down for most of the past year amid disarmament talks. The nation has also announced a program designed to enrich uranium for use as weapons, but US officials doubt it has made much progress in that respect.