Despite predictions that the “emergency” war funding bill would face a battle in the Senate similar to the one it saw in the House of Representatives, the Senate overwhelmingly passed the bill with no new alterations, at a vote of 91-5. 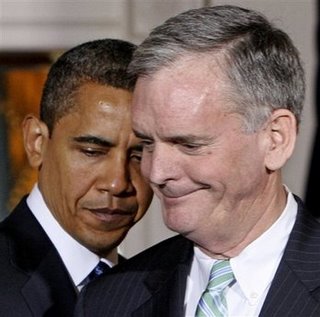 Earlier in the week the House of Representative passed the bill 226-202, and that was only after weeks of haranguing Democratic Congressmen who opposed the bill to change their vote in the name of loyalty to President Obama. Even then, many expressed dissatisfaction with the bill.

Not so in the Senate, where there was considerable complaining that the bill contained a lot of superfluous funding for things that had nothing to do with the war but the only serious challenge came when Sen. Judd Gregg (R-NH) tried to strip a $1 billion provision. When that failed, what remained of the opposition seemed to dry up entirely. The five no votes included 3 Republicans, Sens. DeMint, Enzi and Coburn, Independent Sen. Sanders, and Democratic Sen. Feingold.

That $1 billion was set aside for a “cash for clunkers” program to subsidize the purchase of new cars. The measure was unsurprisingly praised by the Association of International Automobile Manufacturers. Other complaints, including the massive loan guarantee to the International Monetary Fund (IMF) had been expected to be a major issue, as it was in the House of Representatives, but at the end of the day it doesn’t appear to have cost the bill any votes.