Hundreds of thousands of supporters of Mir-Hossein Mousavi remain on the streets of Tehran and other Iranian cities in force today, but with a somewhat more sombre tone as the former prime minister declared today to be a “day of mourning” for those killed during violence in the protests. 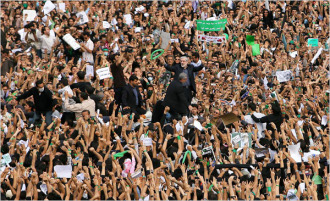 Demonstrators wore black and marched in silence. It is unclear at present how many people have been killed in the clashes: Iran’s state media put the number at eight on Wednesday morning while a human rights group claimed it could be as many as 32.

Today’s protests appeared to be largely without incident, and the Guardian Council announced that it had invited the three opposition candidates to attend a special Saturday meeting to discuss the disputed Friday election. At the moment the protests show no sign of slowing down.

Tomorrow, Supreme Leader Ayatollah Ali Khamenei will lead Friday prayers at Tehran University, urging solidarity among Iranians in the wake of the vote. Khamenei previously called for Iranians to accept the results and support President Mahmoud Ahmadinejad, but later charged the Guardian Council with investigating the growing number of complaints.