Despite the Interior Ministry insisting that incumbent Mahmoud Ahmadinejad won by a wide margin, former Prime Minister of Iran Mir-Hossein Mousavi continues to insist that he was the real winner of the election. 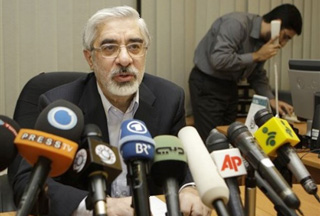 In a written statement released through his website, Mousavi called the entire election a “sleight of hand” and promised to unveil the secrets that led to his defeat. He has promised he won’t surrender to what he called a fraudulent result that amounted to treason.

Thousands of Mousavi’s supporters have as a result taken to the streets, and are clashing with police in the capital city of Tehran. The supporters demanded to know if Ahmadinejad was able to win by such a wide margin why his followers weren’t out celebrating. Indeed there were some reports of Ahmadinejad’s followers celebrating overnight, but the violence and massive police presence this afternoon has apparently led them to stay in their homes.

Interior Minister Sadeq Mahsouli has denied that any voter fraud has occurred, and insists that he hasn’t received a single written complaint in this regard. Supreme Leader Ayatollah Ali Khamenei praised the result, and urged the nation to support Ahmadinejad as its president.