General David Petraeus today announced that violence in Afghanistan had hit its highest level since the 2001 US invasion last week, adding “there is no question the situation has deteriorated over the course of the past two years in particular and there are difficult times ahead.” 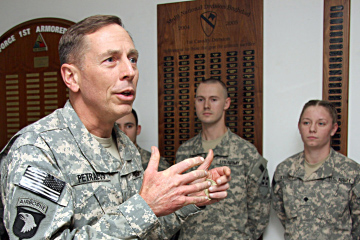 The general provided no data to back up his comments, so it is unclear why he decided that last week as opposed to any other recent week in the ever worsening war, was in particular the worst.

2008 was the deadliest year since the invasion, and 2009 is shaping up to be dramatically worse. With the situation already at an “all time high,” some officials are predicting that the planned US surge will lead to a further jump in violence.

In addition to the surge, Petraeus pressed for an even bigger Afghan military, saying the current goal of 232,000 security forces in the nation by 2012 “may not be enough.” Yet the already enormous expenditure for the Afghan military dwarfs the nation’s entire budget, so growing the already unafforable army may just commit the US to Afghanistan’s security for the forseeable future.