US Special Envoy to North Korea Stephen Bosworth today said that North Korea’s recent test of a nuclear weapon “require that we expand our consideration of new responses.” At the same time, Bosworth insists, the US is not looking at a military invasion of the nation. 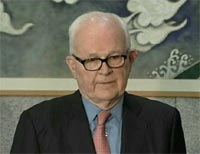 “We have no intention to invade North Korea or change its regime through force, and this has been made clear to the DPRK repeatedly,” Bosworth claimed. He says the US will continue trying to restart the six-party talks which have been halted since April.

Since the tests, US military officials have touted the nation’s readiness to fight a war against the massive North Korean military, and the Russian government has expressed concern that the growing tensions could lead to a nuclear war on the Korean Peninsula.

The primary US response so far has been to seek harsher sanctions against the nation. However, with high profile deals like the one announced last week to sell “bunker buster” bombs to South Korea, the prospect that they are preparing for a military conflict should not be dismissed out of hand.