FBI counterterrorism head Philip Mudd today withdrew his name from consideration as the Department of Homeland Security Undersecretary for Intelligence and Analysis, saying he believed his confirmation hearings would be a “distraction.” 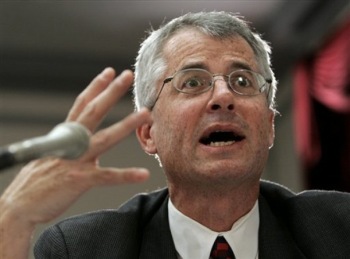 Mudd was reportedly linked to the CIA’s torture program under former President Bush (when he served as deputy director of the Office of Terrorism Analysis) and reportedly had “direct knowledge of the agency’s harsh interrogation program.”

Mudd’s colorful history included coining the phrase “Pepsi jihad” to describe what he called the growth of extremism among young people on the Internet. He was also accused of advocating programs of ethnic targeting designed to snare Iranian-Americans who might by spies.

Perhaps his most famous project to collect consumer data regarding falafel sales in the San Francisco area, believing that the sales records would somehow lead to Iranian terrorists. FBI criminal investigations division head Michael A. Mason reportedly put a stop to the program, saying it was “ridiculous” to put someone on a terrorist list because of the food they ate. The fact that falafel is not an Iranian dish was likewise not lost on many.

One thought on “Torture-Linked Nominee Withdraws for DHS Intel Post”