While far from the focus of his historic Cairo speech today, President Barack Obama’s comments on America’s history with Iran have caused something of a stir, as he became the first sitting US president to publicly admit to America’s role in the 1953 coup in Iran. 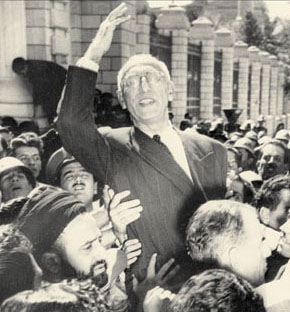 “In the middle of the Cold War, the United States played a role in the overthrow of a democratically elected Iranian government,” Obama admitted, referring to the CIA’s role in the coup against Prime Minister Mohammad Mosaddeq after he nationalized the Iranian oil industry.

The US and British governments supported a coup d’etat in 1953 to ensure Western control over Iranian oil production. Iran remained under the control of the Shahist government until the 1979 Iranian Revolution, in which the current government ceased power.

In the 30 years since the revolution, the US and Iran have had a hostile relationship. In the 1980s this led to the US and Britain supporting the Iraqi government of Saddam Hussein as a regional opponent to Iran. The US provided Iraq with considerable support during the eight year long Iran-Iraq War.

This culminated on July 3, 1988, when a US warship attacked an Iranian civilian jetliner which it claims to have mistaken for an F14 fighter plane. The attack killed all 290 passengers aboard Iran Air Flight 655. Admiral Crowe, the Joint Chiefs chairman at the time, said the US “deeply regretted” the killings.

As Iran faces a hotly contested presidential election this month, the prospect of improved ties with the US looms large, if somewhat tempered by a long history of distrust and repeated comments from US officials saying they don’t really expect negotiations with Iran to settle anything. Still, for the first time in 30 years the possibility of somewhat normalized relations seems real.

9 thoughts on “Obama Admits to US Role in Iran Coup”