Today in Tehran, Iranian President Mahmoud Ahmadinejad held a trilateral summit with Pakistani President Asif Ali Zardari and Afghan President Hamid Karzai. The three agreed to an official statement (available below) in which they pledged, among other things, to work together to eliminate all terrorism in the region. 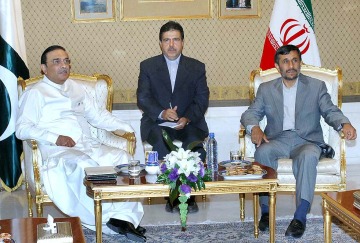 In hosting the leader of the US-established Afghan government and the leader of a Pakistani government increasingly dependent on US aid, the Iranian government made it clear today that, despite American diplomatic efforts to isolate the nation, they are a growing regional power.

The US has been pressing Iran to abandon its civilian nuclear program for years now, despite their own National Intelligence Estimate (NIE) showing the nation had no nuclear weapons program. The Obama Administration has officially sought a diplomatic solution to what it calls an “extraordinary threat,” but insists that to this day no progress has been made, and none is expected in the near term. On Friday, Defense Secretary Gates said President Obama had ordered an updated plan to attack the nation.

Recalling the Joint Statement issued at the conclusion of the First Meeting of Foreign Ministers of the I.R. of Pakistan, I.R. of Afghanistan and I.R. of Iran held in Kabul on 27 April 2009 (1388/2/7);

Underlining the heartfelt desire and will of their peoples for putting an end to insecurity and creating a conducive regional environment for a promising future for their coming generations;

· The sufferings of the people of the region and sacrifices made by them;

· The growing concern arising from the insecurity, terrorism, extremism and drug production and trafficking;

· The deep desire of their Muslim governments and people for broadening cooperation in the political, security, economic, cultural, scientific and social fields and promoting people to people contacts;

· Significance of the regional approaches with the participation of the three states for settling problems of this region;

· Commitments of their countries as provided in the international agreements and treaties;

· The principles and purposes of the UN Charter;

· The rights of all States to sovereignty, independence and territorial integrity;

· The principle of peaceful coexistence, good neighbourly relations and non‑ interference in the internal affairs of each other’s States;

· All measures and acts already taken for establishment of peace and stability in the region;

For the purpose of:

· Bolstering bonds of friendship among the governments and peoples of the three countries;

· Finding a regional solution with the participation of the three States for the establishment of peace, stability and tranquility in the region;

· Alleviating poverty, and addressing the needs of the people;

1‑ To establish a mechanism for holding regular and periodical trilateral consultations on special issues by Senior Officials, Foreign Ministers and the Heads of State/Government of the three countries.

2‑ To reaffirm their deep commitment to make every effort to eliminate extremism, militancy and terrorism and address their root causes which are in stark contrast with the spirit of Islam and rich cultural traditions and customs of the region.

3‑ To encourage cultural interactions including exchange of parliamentary delegations, intellectuals, academicians, seminarians, and the youth as well as promotion of people‑to‑people contacts.

4‑ To exchange experiences, information as well as embark on concentrated efforts towards socio‑economic development in the region and planning and implementing trilateral economic projects in different areas including energy, transportation, industries, mining agriculture, cattle‑breeding and environment.

5‑ To take urgent steps for development of the infrastructure connectivity between the three countries and in the region, including construction of roads, railways and improving the existing ones.

6‑ To collaborate closely in establishing and developing energy corridors in the region, including oil and gas pipelines and electricity networks.

8‑ To encourage the involvement of private sectors of the three countries in the regional development programs.

9‑ To encourage ECO member states for the establishment of a Free Trade Area in the region by 2015 as a priority task, as agreed in the 10th ECO Summit in Tehran (2009).

10‑ To coordinate and to pursue projects for trans‑regional cooperation especially within the framework of ECO and OIC.

11‑ To promote trilateral socio‑cultural cooperation in the areas of education, health, sports, culture and art.

12‑ To strengthen trilateral cooperation among the relevant‑institutions of the three countries to counter production and smuggling of narcotics and psychotropic substances and their illicit trafficking.

13‑ To promote trilateral cooperation among the relevant institutions of the three countries to counter organised crimes such as illegal human‑trafficking, money laundering and arms smuggling.

14‑ To create pull factors in Afghanistan for the safe, voluntary, gradual and dignified return and reintegration of refugees with the sustained and enhanced support of the international community and UNHCR.

15‑ To create incentives and to facilitate the voluntary return of Afghan specialists to their homeland in order to assist rapid reconstruction of the country through attracting cooperation and participation of the relevant international organizations such as UNHCR.

16‑ Emphasizing the importance of reconstruction process in Afghanistan in order to achieve sustainable peace and economic development in that country, with the support of international community including international organizations, financial institutions, donor countries as well as Afghanistan’s immediate neighbours.

17‑ Emphasized further effective measures for implementation of bilateral, trilateral and multilateral agreements to which the three countries are party, concerning trade and transit of goods between and through their countries.

18‑ Reiterated their commitment to establish joint training centers aimed at achieving a proficient labor force for formulation of relevant projects between, the three countries.

19‑ Welcomed the World Bank offer of assistance to develop a plan jointly with the customs authorities of Afghanistan and Pakistan and Afghanistan and Iran to share Customs information electronically.

20‑ To establish a working group in order to conduct a feasibility study for setting up a Joint Investment Fund among the three countries to follow up the adopted decisions by their leaders and also to financially support the trilateral projects. The cases for using the resources of this fund will be determined by the relevant authorities of the three countries.

21‑ To establish a trilateral coordination committee at the level of Deputy Foreign Ministers of the three countries to prepare a comprehensive Action Plan to monitor the progress of trilateral cooperation. The three sides also emphasized that

as the progress of implementation of the agreements to the 2nd Summit Meeting which will be held in Islamabad in October 2009, while the following Summit Meetings will be held next year in alphabetical order, starting from Kabul.

22‑ To also invite, if required and by consensus, other countries to the future Summits under the trilateral process.

24‑ This declaration was done in Tehran on 24 May 2009, in twenty‑four items and three originals, Farsi, Dari and English, each of which is equally authentic.