Locals are reporting today that civilians in the South Waziristan Agency of the Federally Administered Tribal Areas (FATA) are fleeing their homes ahead of reports that the Pakistani military is planning a military operation in the area. 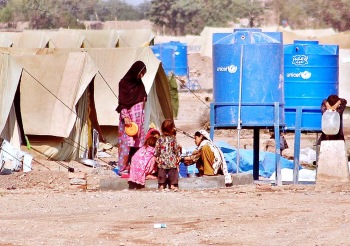 Sources say the June offensive will involve “huge numbers of troops” and will be aimed at establishing government control over the largely lawless tribal areas. Most of the fleeing tribesmen are taking their families to stay with relatives in cities along the border between FATA and the North-West Frontier Province (NWFP). Officials in the Tank district of NWFP are discussing the situation, fearing that a larger number of civilians would be fleeing in the days to come.

The relatively calm portions of the NWFP are already beset by over a million refugees from the government’s various other offensives. Those that can are staying with relatives, but increasing numbers are crowded into small camps ill-prepared for such an influx.

One thought on “Civilians Flee South Waziristan Ahead of Planned Offensive”