Pakistani Interior Minister Rehman Malik today claimed that 700 militants have been killed in the past four days of military offensives in and around the Swat Valley. Yesterday the military said it had killed 200 in one 24 hour period. The tolls and the success being touted by the government in its attacks could not be independently confirmed because the military has barred journalists from the valley. 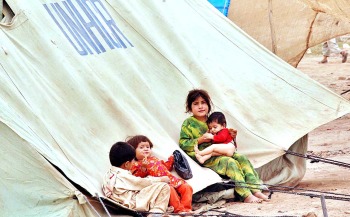 The final number will doubtlessly rise, as President Asif Ali Zardari estimated around 3,000 members of the assorted factions in the valley, while the army has said it is more like 4,000 to 5,000. Whatever the case, Malik reiterated the promise of President Zardari that all of them would be killed in the end.

As usual, the government did not comment on the civilian toll, but reports continue to trickle in from refugees that the indiscriminate shelling of residential neighborhoods has produced a significant toll. Hundreds of thousands of refugees have fled the violence, a number which would doubtlessly be higher if they could flee whenever they wanted, instead of just on those occasions when the military decides to lift the curfew for a few hours. Still, the United Nations says over 360,000 have fled in the past week – on top of the 500,000 already displaced from previous offensives. The number seems bound to continue to rise.

4 thoughts on “Pakistan: 700 Militants Killed in Past Four Days”