With the Pentagon and the White House both feeling the need for “fresh thinking” in the war, General David McKiernan, the top US and NATO commander in Afghanistan has been ousted from his position. Secretary of Defense Robert Gates said he believed it was the “right time” for a change. 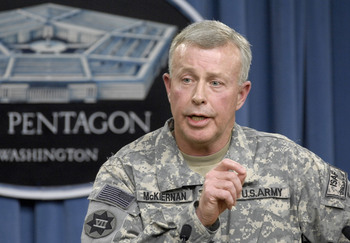 Gen. McKiernan held the position for just under a year. It was a memorable year, with Afghanistan torn by record violence and the US announcing multiple massive strategy changes, all of which involved throwing more troops and money at the nation. McKiernan’s tenure was also bookended by two attacks which each shattered the previous record for civilians killed in a single US air strike: a Herat strike last August killing 90 and last week’s Farah Province strike, which appears to have killed 147 civilians.

But for the media, Gen. McKiernan will be perhaps best remembered for his unflappable optimism in the face of ever-deteriorating conditions, and his penchant for lashing out at the press for reporting the facts on the ground without his trademark rose-colored glasses.

Secretary Gates is recommending Lieutenant General Stanley McChrystal to replace him. McChrystal had previously seen his nomination to be director of the Joint Staff delayed by questions about detainee abuse by forces under his command. With American soldiers still holding detainees in Afghanistan, it seems curious that this question has yet to resurface among lawmakers.

One thought on “Gen. McKiernan Replaced as Afghan Commander”