National Security Adviser James Jones says that despite the rather pointed demands from Afghan President Hamid Karzai, the United States will not stop launching air strikes inside of Afghanistan. Such a move, the official insisted, would be “imprudent.” 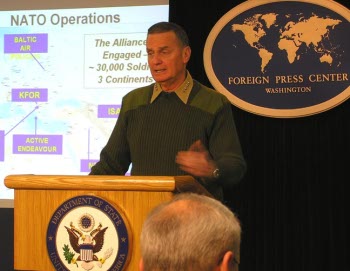 Yet Jones did not seem at all concerned when asked what Karzai’s reaction to the continued attacks would be, saying “I think he understands that we have to have the full complement of our offensive military power when we need it.”

A US attack last week in the Farah Province killed as many as 147 civilians, though the US military has repeatedly changed its official story and at present has yet to acknowledge the full toll. Jones blamed the Taliban for the toll, saying the civilians were being used as “shields,” but promised to ensure that commanders “understand, you know, the subtleties of the situation.”

The latest aspect of the Farah attack, the deadliest single US attack in the war’s eight year history, are reports that a leading human rights agency is investigating claims that the US used white phosphorus in the attacks. The US has denied the allegation,

2 thoughts on “US Dismisses Karzai Demand to Halt Air Strikes”