Afghan police are saying today that over 100 people were killed in this week’s US air strike in Farah Province. 25 to 30 are suspected Taliban, while the vast majority were civilians. A Red Cross investigative team confirmed the findings, saying they had seen “dozens” of bodies in two separate locations and that civilians were still digging through the rubble of their mud-brick homes looking for others. 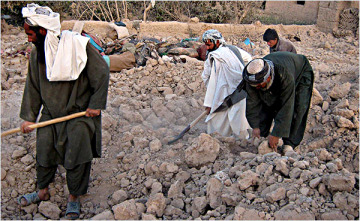 The US military is still conducting its own investigation of the killings, and President Obama has expressed “regret” for the deaths, promising (as has been so often the case) to make every effort to avoid a repeat. Yet General David McKiernan is not so certain, he and other officials are claiming that the entire incident may have been manufactured by the Taliban.

The incident stands as the largest civilian toll in Afghanistan since August, 2008, when the US killed at least 90 civilians in the neighboring Herat Province. In that case the US angrily denied the allegations for months, finally admitting to killing many civilians but insisting it was legitimate.

Afghan President Hamid Karzai, in Washington DC today for a summit with US President Obama and Pakistani President Zardari, has ordered his own probe into the incident, and promises to once again bring up the issue of mounting civilian casualties with Obama. Karzai’s repeated complaints about the massive civilian toll of the US operations has soured his relationship with the international forces, still prosecuting their already eight year long war with no end in sight.

8 thoughts on “US Strikes in Afghanistan Kill 100, Mostly Civilians”