The definition of insanity is doing the same thing over and over and expecting different results. 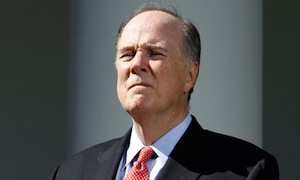 To that end, President Obama’s National Security Adviser Thomas Donilon today conceded at a conference at the Brookings Institute that even though massive US sanctions on Iran have done serious harm to the nation’s economy, they have not led to Iran “fundamentally altering its behavior.”

Donilon then, continuing his speech, went on to back President Obama’s current plan to impose addition sanctions on Iran, providing no justification for why he thought this might lead to anything resembling a policy change.

Iran’s Foreign Ministry responded to the latest round of sanctions by insisting, in case anyone wasn’t paying attention, that the sanctions won’t do anything to change their current policies, saying the effort “will be in vain.”

7 thoughts on “Sanctions Against Iran Not Working, White House Admits”