Kicking off the three-way summit between the United States, Pakistan and Afghanistan, the three parties very publicly played up the closeness of their respective alliances. Each touted the importance of the others’ security issues as inseparable from their own. Behind the scenes, however, a growing amount of distrust and conflicting agendas are keeping them at arm’s length. 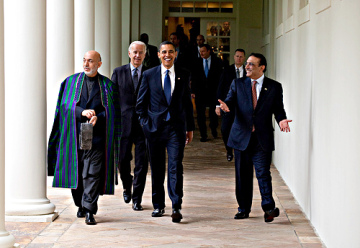 It’s no secret that the Obama Administration has been eager to see Afghan President Hamid Karzai replaced. There has even been talk of NATO trying to undermine the Afghan presidency in general just to reduce Karzai to a figurehead. The lack of a serious alternative to Karzai in the upcoming elections has left the administration resigned to what will likely be another five years with Karzai – even as they try to work directly with the Afghan cabinet and cut him out of the loop.

Karzai’s visit is particularly uncomfortable, coming as officials are confirming a US air strike has killed over 100 people, mostly civilians, in the Farah Province of Afghanistan. Secretary of State Hillary Clinton has publicly apologized for the killings, yet General David McKiernan and others in the military are alleging that the whole incident may have been made up by the Taliban.

The administration is also emphasizing its “unambiguous” support for Pakistani President Asif Ali Zardari, at a time when it has also reportedly courting his principle rival, opposition leader Nawaz Sharif. US officials seem quite pleased with the collapse of the Swat Valley peace deal, but were vocally critical of Zardari for having signed the deal in the first place.

In the end, Karzai cannot possibly brook massive US-caused civilian deaths while fighting for re-election, nor is Zardari equipped to fight all the wars the Obama Administration has picked out for him. While the summit will doubtlessly provide numerous photo ops, none of these leaders are under any illusions that their respective interests are identical.