In Saturday night’s debate, the GOP frontrunner Mitt Romney reiterated the usual stump speech against Obama’s policies regarding Iran. The problem is, all of it was inaccurate. 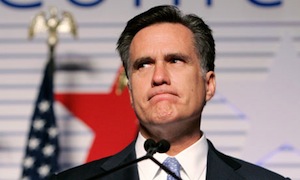 “We have a nation, which is intent on becoming nuclear,” Romney said. “Iran has pursued their ambition without having crippling sanctions against them… And he’s failed to put together a plan to show Iran that we have the capacity to remove them militarily from their plans to have nuclear weaponry. Look, this is a failed presidency.”

The truth is, Iran has repeatedly said they don’t want a nuclear weapon and characterized their nuclear program as entirely civilian and peaceful in nature. Numerous U.S. intelligence reports as well as the latest IAEA report have reinforced that claim, finding no evidence of an active weapons program.

As to the issue of sanctions, Romney is very clearly lying. As he and everybody else knows, Iran in fact does have crippling sanctions imposed on them. President Obama has supported, and Congress has passed, a number of harsh sanctions on Iran, the latest of which target Iran’s oil and banking sectors and which are already having harmful effects on their economy.

With regard to showing Iran that we have the capacity to deter them and their nuclear program militarily, surely Romney knows better. The Obama administration is engaging in a covert war against Iran, which includes cyber-warfare, commercial sabotage, targeted assassinations of Iranian nuclear scientists, support for Iranian terrorists aiming to undermine the regime, a vast espionage apparatus, and naval provocations in the Persian Gulf.

5 thoughts on “In GOP Debate, Romney Reiterates Lies on Iran”