The U.S. is leading an effort to water down an international ban on cluster bombs, weapons that are widely considered to be inherently indiscriminate. 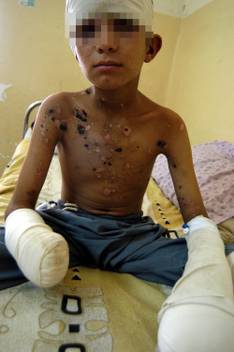 The Convention on Cluster Munitions prohibits cluster munitions, requires the destruction of stockpiles within eight years, and has been signed by 111 countries, while the U.S. has steadfastly refused to sign it. In a proposal that meant to neuter the convention, Washington now is pushing to permit the use of cluster bombs as long as they were manufactured after 1980 and had a failure rate of less than one per cent.

The Convention began to take effect in June 2010, just after a U.S.cluster bomb killed 35 women and children in Yemen, with the Pentagon stubbornly refusing to admit to the wrongdoing despite damning evidence compiled by Amnesty International, which was later corroborated by classified diplomatic cables released by WikiLeaks.

Cluster bombs are highly imprecise weapons that work by dispersing hundreds of smaller submunitions, often referred to as bomblets or grenades. Often, the bomblets do not initially explode, only to explode later with civilians about.

Cluster bombs were used in the initial phases of the Afghanistan and Iraq wars, and the Obama administration is currently leading the cause to keep them legal.

22 thoughts on “US Moves to Overturn Ban on Cluster Bombs”