Speaking today to the public inquiry into Britain’s involvement in the 2003 invasion of Iraq, British Foreign Secretary David Miliband defended the war on the basis that he believes Arab nations really “respected” the fact that after Britain and the US repeatedly threatened invasion, they eventually followed through. 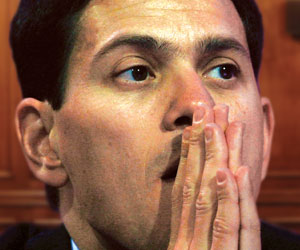 Miliband claimed that starting the ill-advised war on false pretexts, sparking a civil war which has killed hundreds of thousands of civilians, was the right thing to do and “really sent a message” that Britain means it when it says its going to do something.

Miliband also chastised the United Nations for “feeble” attempts to convince Saddam Hussein’s government to give up its weapons of mass destruction, though of course after the invasion it was discovered that Iraq had none.

He cautioned against learning the “wrong lessons” from the war and insisted that Britain needed to remain commited to global intervention, and that it should be willing to launch similar wars in the future.