Fresh off a contentious visit to Pakistan, Vice President Joe Biden has arrived in Iraq on the latest unannounced visit of his tour with an eye towards serious talks about the continuation of the US war beyond the December deadline specified in the Status of Forces Agreement. 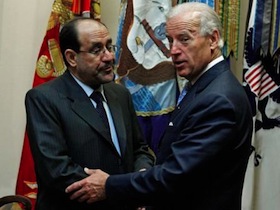 Iraqi officials have confirmed that Biden’s talks will center around the possibility of keeping American troops in the nation in 2012 and beyond, with meetings planned with President Talabani, Prime Minister Maliki and Kurdish President Barzani.

Just weeks ago Prime Minister Maliki insisted that the US would absolutely have to leave on time, but whether such comments will stand up to a meeting with US officials, a number of whom have expressed determination to remain in Iraq for years to come, remains to be seen.

But for Maliki backing off may not be an option either, as influential cleric Moqtada al-Sadr has made his current support for the government predicated on keeping the US withdrawal on schedule. Though Sadr seems keen at the moment to set himself up as a political power-broker and not a commander of militias, this could change at any time if he perceived the US, which openly opposed his bloc being in the government, were to remain.