In a speech earlier today, Iran’s atomic energy head Ali Akbar Salehi announced that the nation has perfected the technology to begin producing so-called “third generation” centrifuges for its civilian enrichment program, enabling them to enrich uranium as much as six times faster than the current ones. 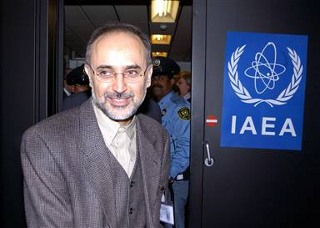 The US State Department was quick to condemn the development, and State Dept. spokesman Philip Crowley declared that the technological development proved that Iran “has nefarious intentions” for its nuclear program.

But Crowley’s claims fly in the face of those previously made by the Obama Administration, that Iran lacked the capability to produce sufficient uranium at 20 percent enrichment to fuel its medical isotope reactor.

At the time they claimed Iran’s lack of enrichment capability proved that the civilian program was insincere. Now that Iran is attempting to improve their capacity by developing better in-house centrifuges, the claim has been turned on its head, and Iran’s possession of the capability to make that civilian program viable itself proves that the nation is plotting something untoward.

Whichever the case, the IAEA has continued to be able to certify the non-diversion of enriched uranium to any unapproved purpose, and the new centrifuges will not change that in any way. Moreover, the simple development of more efficient centrifuges does not appear to be in and of itself a violation of any agreement signed by Iran or even those agreements other nations (the US in particular) have attempted to impose on them.