Reports emerged this weekend from Scotland’s Sunday Herald that the US government has contracted with a Florida company to ship a massive amount of weaponry, including hundreds of bunker buster bombs, to Diego Garcia. 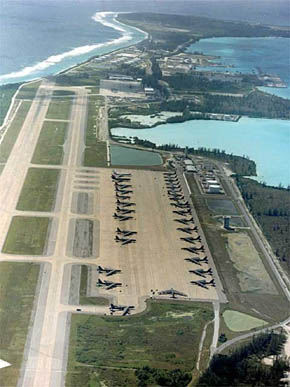 Diego Garcia, a small island in the Indian Ocean, was depopulated by Britain in the 1960’s and 1970’s, and transferred to the United States as a military base. The island’s proximity to Iran suggests it may be used as a staging ground for US air strikes against the nation.

The proximity is not lost on Iran’s state media, which is reporting that the bunker-busters are a clear move to threaten Iran’s nuclear facilities. The US has repeatedly threatened to attack Iran over its civilian nuclear program.

The Sunday Herald report also cites numerous experts as saying that the lack of publicity for the move, just one of several examples of the Obama Administration adding major amounts of weaponry to the area around Iran, suggests they believe a confrontation is more likely. The Pentagon has thus far refused to comment.

35 thoughts on “Report: US Sending Massive Amounts of Weaponry to Diego Garcia”