Calling 2009 a “painful year,” the US Army announced today that it faced a record number of suicides among Army personnel, with 160 active-duty soldiers taking their own lives. 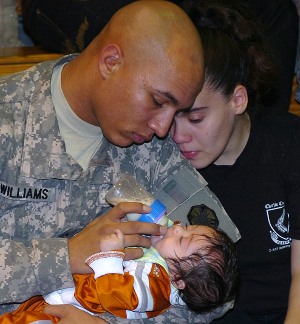 Deployment away from family is just one issue facing soldiers

But despite the expectation that endless combat deployments would be playing a role in the deaths, officials say that about 1/3 of the soldiers who took their lives this year hadn’t yet been sent on any combat missions.

Experts say that the military has developed a culture which discourages soldiers from seeking psychological help, and the stigma associated with things like PTSD treatment will take a long time to repair. In the meantime suicides are a growing problem for the military, and one that they will continue to try to tackle.