Having managed to win support for what it called “a strong and united international response” in the form of new sanctions and a UN Security Council resolution against North Korea, the White House says the United States will now “confront” ships near North Korea, though it will not forcibly board them. 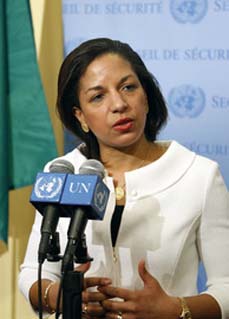 According to Ambassador to the United Nations Susan Rice, the US will seek permission to board the ships and if they refuse they will press the ship’s home nation and others to force the ship to report to a port for a “mandatory inspection.”

Rice added that she expected North Korea to respond “irresponsibly” to the new measures, and that she would not be surprised if the nation reacted with “further provocation.” Analysts, however, say the resolution measures the US is hoping to put into action are largely voluntary, and will be ultimately unenforcable.

The resolution is in response to last month’s underground nuclear weapons test in North Korea, in which the nation appeared to successfully test an atomic weapon roughly on the scale of those the United States used against the Japanese cities of Hiroshima and Nagasaki at the end of World War 2.

2 thoughts on “US to ‘Confront’ Ships Near North Korea, But Won’t Forcibly Board Them”